Note: This narrative is from Ms. Celerina M. Navarro.  She posted it on her Facebook page and I asked for permission to re-post it here – verbatim.  She narrated this as if you are traveling with her as your tour guide and teacher in Batanes.  Enjoy! 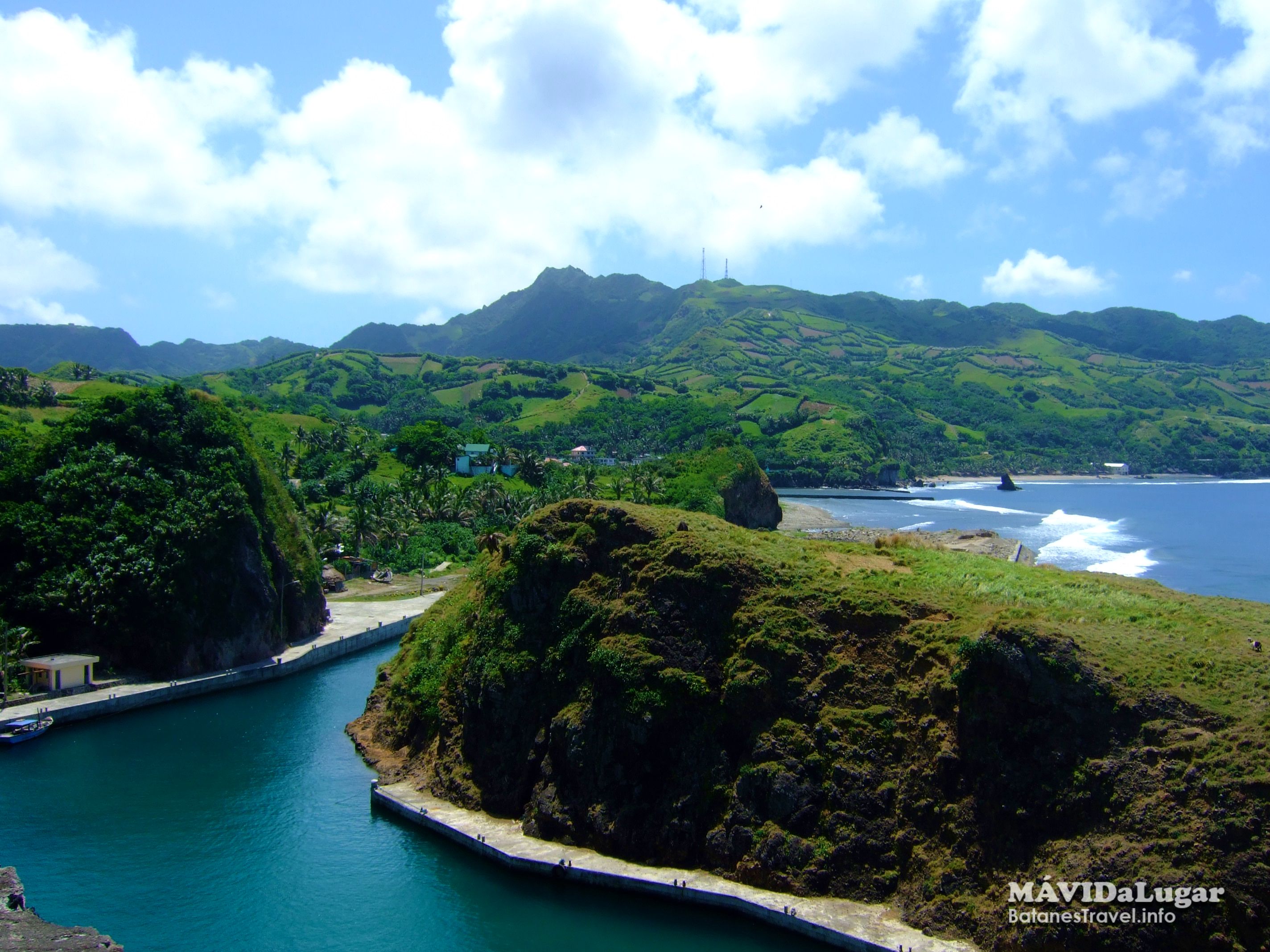 Kapian ka (singular) mo (plural) nu Dios! That’s our way of greeting in Batanes. It means God be good to you. Can you say that to the one beside you?  The answer would be “As kan imo pa.” and so with you.   You can say that to the one who greeted you.

Are we all set for our next stop- Mahatao?  From Basco we head south to Mahatao the next town.   It is 6 kms from Basco.   Batan island where we are now is also called the mainland.   It hosts four towns Basco, Mahatao, Ivana and Uyugan.

There are two other towns of Batanes both are islands: Sabtang and Itbayat. Sabtang is your destination tomorrow and Itbayat is not possible in a 3 day tour here.

There are 8 other islands in the Batanes archipelago and all are uninhabited. We are now in the National road, the main road that connects the four towns. There used to be a full view of the sea from Basco to Mahatao but as you can see, much of the beautiful scenery along the coastline of Basco has been covered by these hotels as a result of tourism in our province.

On your left is the source of all the power supply of Batan island, the NAPOCOR-Batanes.

Coming on your right is the Batanes Resort a hotel and restaurant owned by the provincial government.

This road on your left after the bridge goes up to Tukon or hill where the Fundacion Pacita is located. It is the most expensive hotel in Batanes but it is always fully booked with a long reservation list. The place was owned by the late Pacita Abad, an internationally known artist. Before she died from cancer, she bequeathed it to her siblings one of which is former cabinet secretary of Education and Budget, Butch Abad. She envisioned it to be a center for art and as they saw fit to earn income and use the profit to restore vernacular houses in Batanes and provide scholarships to deserving Ivatan students in the best educational institutions in the country.

We are now in Chanarian, once a place where farmers built their farmhouses to be close to their fields but is now the site of many hotels and restaurants and I am sure some of you are billeted there. The most prominent member of this small erstwhile farmhouse site is our governor, Gov. Malou Horlina-Cayco who owns a house and lives there. As you can see. the view is wonderful here with the seafront and a beach that you can have a peaceful stroll.

We are now entering the boundary of Basco- Mahatao. We will be passing a very scenic winding road. Before this zigzag road was constructed, the people used a trail located over the hilltops that you see towering over us. Since there was no means of transportation people from the southern towns had to walk by climbing up and down the hills. In the 1930’s some Japanese engineers came to Batanes to survey and eventually supervised the construction of this beautiful ribbon-like road that is much more convenient and easier to traverse. Besides, here you see one of the most breathtaking views of Batanes although as an Ivatan all areas of Batanes are breathtaking. Building this road did not come easy as some of the young Ivatan laborers fell to their deaths when their rope supporting them gave way as they worked on its construction.

Half way to Mahatao town proper there is a view deck where we will stop for about 15 minutes for you to take pictures and get a good view of the place we call Chawa, an outcrop of the nearby extinct volcanoes.

If you look carefully, you will see that the rocks are cooled molten lava that flowed out from the volcanoes that resulted in this rugged but picturesque view. If you look up on your left southward, you’ll see a small rectangular rock perched precariously over the solid limestone cliff without any visible connection to hold it. According to folktales, directly below it is a cave where much gold was stored by a rich man from Mahatao. But to make sure no one will take his hidden treasure, he put a rock there and made a curse that if anyone attempts to steal the gold, the rock will slide down to cover the cave where it is hidden and of course kill the thief. Many typhoons have passed and that legendary rock has not fallen off. Which means, nobody has ever attempted to steal the hidden treasure.

As we go closer to the town, we will see a small but beautiful shelter port on your right.. This serves to protect our native falowas and tatayas during stormy weather. A big help is this small floating island which they say is where Mahatao got it’s name for mahatahatao means to float. There is another meaning of Mahatao but it is better left unsaid.  Mahatao was founded in 1783 (Blending of Cultures: The Batanes 1668-1888 p. 114) but was formally established in 1787 after it had enough families and a gobernadorcillo.

Mahatao has a most remarkable archaeological story. In fact a place called Sunget located on that hill at the back of the church is believed to be the first settlement of the Austronesians in Batan that came 2,000 B.C. Many places here like Diura, Tayid, Disvanyangan and Mavuyok a Achip and the plaza and the patio of the church are all rich archaeological sites but which cannot be excavated fully due to their heavily developed location and use now.

Here you see precious and remarkable remnants of the Spanish era- the San Carlos Borromeo Church now one of the 26 National Treasures named by the National Commission on Arts and Culture, the Spanish built bridge still in use and in good condition and the only surviving structure of tile roofing and stone and mortar material of that era.

There in the plaza beside the left side of the church are two lighthouses built during the Spanish era that served to guide the fishermen towards a safe narrow passage by following the alignment of the light coming from the two openings of the light houses.

Researchers discovered in Rakwaydi (Rakuh a Idi or Big Settlement) in Diura located on the east coast here dating at least to the 17th century to be the largest settlement of Batan. Many other settlements in the area are slowly being discovered by the Batanes Heritage Conservation Corps but they have to have it well secured and preserved. Rakwaydi is also the site of the vivid description of Ivatan life in the first written document about Batanes written by the Japanese crewmen who drifted to Batanes during a storm and stayed for almost three years (1668-1670). They were taken as slaves living with their Ivatan masters. The account is detailed and long and it will take time like the story of Mt. Iraya. so comeback for it next time.

Mahatao has the most bountiful water supply and it is even helping Ivana with its limited water source. There is even a swimming pool that is man-made but supplied by a natural spring. It’ s called the fountain of youth because legend says if you bathe in it, you will always be youthful. If we are lucky we can go there on your third day.

Mahatao has a population with 1,555 the fourth largest population of Batanes. They are known for their mathematical skills and dancing prowess. You should see their very young children do ballroom dances because they can take your breath away with their grace and nimble twists and turns like professional dancers.

Mahatao has the best swimming areas with her stretches of beaches with cream colored sand.. But please don’t swim on the beach. Swim in the sea.

Last but not the least, they have this very scenic place called Rakuh a Payaman, a communal pasture that Mahatao shares with Ivana and Uyugan on the eastern portion of this town. There you can literally be pushed by the winds on a windy day.